A brief history of Flyleather and Nike’s partnership with ELeather

The beginning of a sustainable partnership

On a momentous day back in September 2017 ELeather announced their long-term, strategic innovation partnership with Nike with the idea of introducing a new super-material to the sporting footwear brand. Together ELeather and Nike had been evolving an engineered leather under the partnership ready for 2017 when ‘Flyleather’ was introduced to the world of footwear. The announcement coincided with Nike’s commercial release of its first Flyleather product – Nike Flyleather Tennis Classic.

Chris McBean (ELeather’s CEO at the time) commented that “Nike and ELeather share the same rebellious spirit. When told it can’t be done, we dig deeper and do it. Nike is known for being one of the top innovation companies in the world, and one that shares our view of making the most of the world’s natural and limited resources. The partnership with Nike has allowed us to refine our performance engineered leather to meet the exacting standards required for success in their class leading products.”.

Since then, the footwear brand released Flyleather versions of some of their classic models including Air Force 1, Air Max 90, Cortez, Jordan 1.

The greatest advance in leather, since leather

Flyleather shares its sustainability credentials with ELeather’s other engineered leather products meaning not only does it save thousands of tons of leather offcuts from ending up in landfill, but it also uses less water in the manufacturing process.

Not only that, it is also 40% lighter and five times more abrasion resistant than traditional leather, but also improves cutting efficiency thanks to the fact that it is produced on a roll as opposed to an irregularly shaped hide.

This is a great benefit to Nike considering that leather, as a material, has the second-highest environmental impact on the company’s carbon emissions and water usage. By introducing Flyleather into the mix, Nike were able to not only introduce a new innovative material but also improve their sustainability credentials.

According to Nike’s website Flyleather is the greatest advance in leather, since leather with the company’s Director of Materials Technology, Bhupesh Dua hailing it “Nike’s most sustainable engineered leather, including synthetic leather”.

A partnership that keeps on giving

ELeather and Nike share a passion for things such as innovations and sustainability so teaming up for joint collaborations produces great results. So far ELeather had the privilege of participating in Nike’s creative campaigns outlined below. 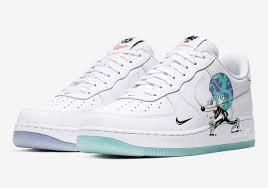 The project was a great initiative to celebrate an increasingly important date in the calendar but also to highlight Nike’s efforts in producing sustainable footwear. The campaign was supported by a video, some of which had been filmed at ELeather’s manufacturing facility in UK detailing each step of the of the process turning unwanted leather offcuts into Flyleather.

The collection was a great hit and, to this day, a pair or Earth Day limited edition Nike shoes is proudly displayed in ELeather’s showroom in their Peterborough factory. 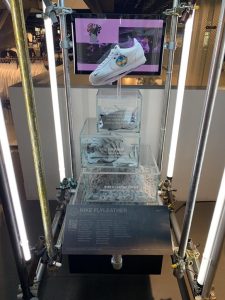 Throughout 2019 shoppers at Nike’s flagship store in Oxford Street, London were treated to a visual display explaining what Flyleather is and how it’s made.

A limited edition Cortez Shoe was suspended in the air above clear boxes visualising manufacturing steps from leather trimmings to the finished Flyleather material. The white board then described and explained process further in more detail. 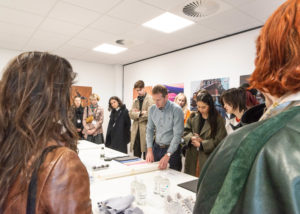 2019 was clearly a busy year for Nike/ELeather as the joint collaborations did not end there! This time Nike partnered with Dazed magazine, British Designer Samuel Ross and Central Saint Martins college in London to educate young designers on the importance of sustainable design.

A group of students were educated on what Flyleather is and how to work with it before arriving at ELeather HQ for a factory tour and a seminar explaining the manufacturing process and the material’s environmental credentials.

The students were then asked to come up with their own designs using Flyleather with a selection of those later exhibited at Copenhagen Fashion Summit.

ELeather caught up with some of the project participants a few month later to discuss their experience of working with engineered leather as well as importance of sustainability and circular design.

To celebrate Earth Day, 2020 Nike approached Berlin-based artist, Ruohan Wang to create a unique creative design based on Flyleather version of the timeless Air Force 1 plus Air Max 90 and Blazer Mid 77. As the world was in Coronavirus-caused turmoil in early 2020, Nike decided to release the results of this collaboration during September’s climate week  instead, under a slogan “Earthday, Everyday”.

Ruohan is known for her abstract use of colour, which together with the theme of embracing our earth resulted in colourful graphics wrapping around the entire Flyleather upper  of the shoe. On her instagram , she said “My sincere appreciation to Nike for their continued support of sustainability within their brand and also for their support of young artists with such meaningful projects.”

Around the same time, in September 2020, the Nike Skateboard team (Nike SB) were getting ready to launch the remastered version the original Janoski shoe – this time in Flyleather.

What makes this design unlike any other Nike Flyleather shoe models is that, using the reverse of the material, resulted in a suede-like surface.

ELeather team were delighted to welcome Stefan, along with a film crew and a few other notable skateboarders, at our production site in Cambridgeshire, UK. The tour of our factory even made it into the final cut of the official promotional video used during the launch.

Nike have been at the forefront of innovation and striving towards a circular design for years. They search for the most sustainable solutions and then work with companies like ELeather to develop them even further. This results in unique material such as Flyleather or Flyknit that, not only reduces waste, but can perform 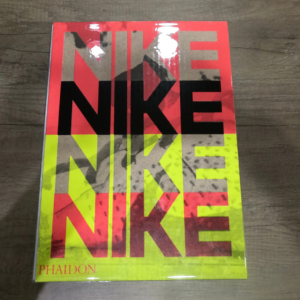 to the highest standard.

Their sustainability journey and their ‘move to zero’  initiative has resulted in an exceptional publication. Nike: Better is Temporary by Sam Grawe is a visual survey that “offers an unprecedented, behind-the-scenes exploration into Nike’s ethos-driven design formula, placing industry-defining innovations and globally recognized products alongside previously unpublished designs, prototypes, insider stories, and more”.

Get your copy directly at Phaidon here. Or, if you happen to be at our Bevan centre, pop down to the showroom and flick through it over a cup of tea.

ELeather are proud to collaborate with iconic, global brands such as Nike outside of our core transportation markets. The partnership is a testament to the versatility of sustainable, engineered leather and how it can contribute not only to the production of superior products, but also how it has a positive and meaningful impact on our clients’ sustainability credentials.

If you’d like to be the first one to hear about ELeather’s future projects with other global brands sign up to our newsletter below!