As the dust settled on the COP26 held in Glasgow, Scotland, earlier this month and the delegates, speakers and celebrity guests have all made it home, we’re looking at what decisions have been made with regards to climate change and what they mean in practice.

The ultimate goal – with all its complexities – was a simple one: find a way to reduce humanity’s negative impact on the planet and, in time, stop the progress of climate change. Easier said than done, it was broken down into four key segments:

And so, delegates representing almost 200 countries descended on the largest city in Scotland with the weight of the younger generation’s futures placed firmly on their shoulders.

A (very) Brief Look at What Has Been Achieved

As per the Paris Agreement, parties were obliged to set out and present new NDCs (nationally determined contributions) every five years. COP26 recognised that we don’t have the luxury to wait another five years to set out (let alone meet) our objectives. As a result, members are required to present their new NDCs next year at COP27 in Egypt.

The conference recognised the urgent need for a plan to phase out the use of coal which is currently responsible for a staggering 40% of the annual CO2 emissions. At the eleventh hour, however, the wording had  been amended to “phase down“ which doesn’t carry the same urgency but will kick off the process which will, in time, lead to the same result.

In a historic move, COP agreed and officially noted that unrestricted burning of fossil fuels has been a major cause of climate change. And although the path to phasing out unabated coal and fossil fuels is unclear and no firm dates have been set to stop the subsidies that artificially lower the price of coal, oil and gas – it’s the first step in the right direction.

The Paris Agreement announced in 2015 left a few matters unclear with potential loopholes around the matter of carbon trading. Those aspects have been clarified at COP26, setting common rules for all domestic and international emissions trading markets.

Before the conference began, it became clear that developed countries were falling short to deliver on their collective pledge of $1billion per year to finance climate change with the pressure mounting from developing countries already experiencing extreme weather events triggered by climate change. The official text of the COP decree “urges developed country parties to at least double their collective provision of climate finance for adaptation to developing country Parties from 2019 levels by 2025”  .

Was COP26 successful or was it a missed opportunity? As most commitments are self-policed only time will tell.

Activists have branded the event a failure with thousands protesting in Glasgow and other cities around the world. But the hugely positive aspect of it was seeing innovators from all sectors come together and present solutions to some of the most urgent matters – from hydrogen energy to farming, deforestation and more. It’s those innovative and sustainable solutions that are our best chance of succeeding in the race against climate change.

COP26 and the Consequences for the Leather Industry

How will the decisions made at COP26 impact the leather market? Whilst leather hasn’t been the point of discussion at the conference, it is very closely linked to cattle farming which is incredibly carbon-intensive. 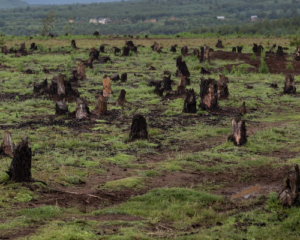 To put things in perspective, global agriculture in 2015 was responsible for 34% of total emissions and beef alone constituted 8.5% of that. Breaking beef production emissions by type, farming is a staggering two-thirds of this impact. Clearing land for grazing or growing feed takes up another 27% with only 7% of the production impact coming from processing, transport, retail and packaging.

One of the major pledges signed by member countries was to cut methane emissions by 30% by 2030. And since cattle are a big producer of methane, this means big changes for the industry.

Another headline-hitting pledge signed by more than 100 countries was to halt and reverse deforestation and land degradation by 2030. A third of cattle’s impact is caused by farming as the animals need increasingly larger amounts of land to graze on.

So, whilst the leather industry wasn’t directly discussed, there are big changes coming its way as potentially less beef means less leather. If these climate pledges are met, traditional leather potentially will become limited.

But even if the farming and cattle industry halves in the next ten years it will still be a source of animal fibre. Production of materials such as ELeather allows us to make efficient use of those natural leather fibres to create a longer lasting, higher performing and more sustainable leather material.

Got The New iPhone 13? This Is The Case You Need To Protect It…