Zurich, the largest city in Switzerland is known as a global financial capital. Nestled at the north end of Lake Zurich with picturesque views over Europe’s highest mountain range in the distance.

In 2016 Zurich was named the ‘greenest ‘city on the planet and since then the local authorities have been making further headway in establishing policies aimed at reducing its impact on the natural world around the metropolitan area.

It is, therefore, no surprise that Verkehrsbetriebe Zürich (VBZ) who is the public transport operator in Zurich operating trams, trolleybuses, traditional buses and a funicular, has been exploring and implementing sustainable technologies in within its vehicles for years.

For people and the planet

Back in 2018 VBZ had a novel idea to turn one of their hybrid buses into a travelling market research platform and let the public decide the new material for seating upholstery. The bus seats were split between austere wooden seats, traditional fabric upholstery synonymous with buses and a novel material that looks and feels like leather called ELeather. 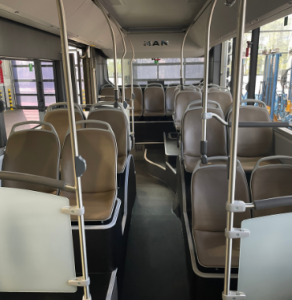 The final choice was ELeather. The population of Zurich appreciated that it was a more hygienic choice than fabric which accumulates dust and dirt and more comfortable than a simple wooden seat, especially on a longer ride.

But what the locals didn’t necessarily know is that ELeather has been a choice that not only benefitted them but also the planet. It’s made with waste leather that would otherwise be sent to landfill manufactured in an environmentally friendly way in Europe.

People of Zurich can travel on public transport with clear conscience knowing that VBZ not only have their customers but also the planet’s best interest at heart.

Public decision to use ELeather upholstery was welcomed at the VBZ HQ since it offers multiple additional benefits in the manufacturing stages of public transport seating. The material is produced on a roll with a consistent quality throughout which allows for stack cutting and reduces waste.

Once on the bus, it is easy to maintain with regular light cleaning that, unlike fabrics, avoids a build up of dust and dirt overtime and reduces the need to remove and dry clean the covers meaning vehicles stay operational at all times.

ELeather is also one of the most durable materials on the market. The fact that it can remain on an in-service but for over a decade without bagging and sagging means operators such as VBZ don’t have to install new upholstery as often reducing cost and environmental impact further.

The City of Zurich has set itself the goal to bring direct greenhouse gas emissions in the metropolitan area to net zero by 2040 with a reduction of at least 50% of the 1990 levels in 2030. This means VBZ is focusing on electrifying their fleet by 2030 and the company has recently announced purchase of 15 new electric buses.

Should ELeather be the material of choice for those vehicles, its lightweight properties will help towards overall weight reduction of the vehicle therefore increasing its range on a single charge.

In the meantime, 19 hybrid buses are already operating in the city with ELeather upholstery bringing comfort and hygiene for the passengers, lower environmental impact for the planet and production efficiencies for VBZ.

All images courtesy of VBZ.